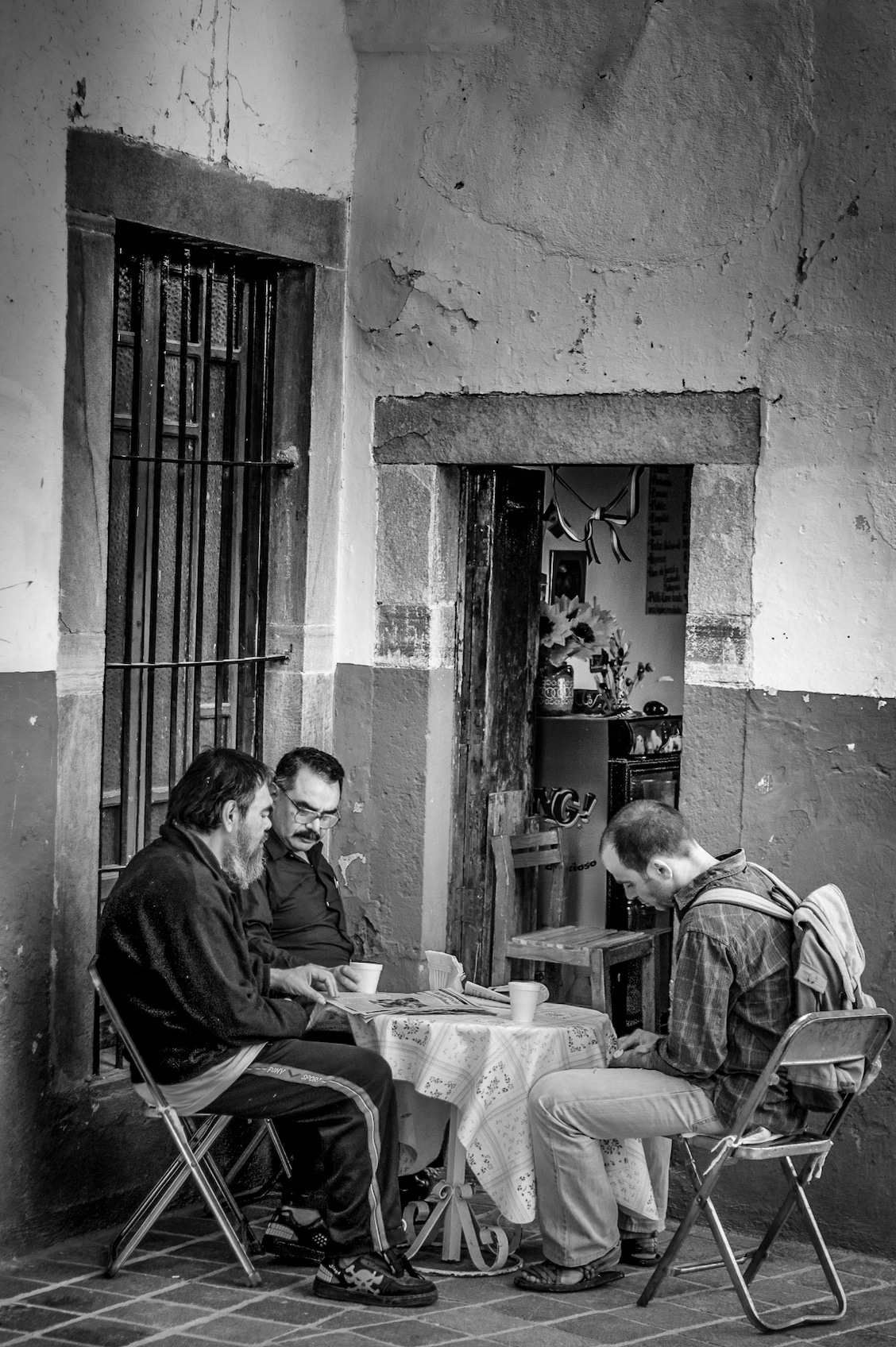 This featured image is from the Common Ground project: Locals in Guanajuato, Mexico discuss News and Politics⁠ over coffee. Thank you @biomimi_healingspaces for the beautiful comment on this image via instagram; “the action of stillness.” I love the irony. More images are available to see on Instagram.

Non-Fiction Directed by Olivier Assayas. I usually don’t like non-visual films. In cinema we write with light, not words. Dialog is merely supplemental. So why am I so interested in a film that Rolling Stone Magazine describes as “Talk, Talk, Talk,” while Assayas himself says “this movie’s explicitly nonvisual. And I never saw it as flattering in terms of mise en scène.”

Both thematically and aesthetically, the evocative duality attracts me. While their action is primarily to be in stillness, there is great turmoil inside each character as they seek refuge in salons, cafes, bedrooms, living rooms and office lounges while indulging in french food, wine, cigarettes, love making and intellectual stimuli. Their conversations run the gamut but most often rest on anxieties over new technological trends in the writing and publishing industry–an allegory on the state of affairs in Assaya’s own industry.

With DP Yorick Le Saux, his use of super 16mm and flexible diffused light is a nostalgic homage to the arthouse spirit of French New Wave in the 50’s and 60’s. However, at times it feels out of place–self aware that it’s time to embrace something new. I think Assayas and Le Saux recognized this–in one way or another–and they shot the closing scenes in 35mm amidst the warm embrace of a late day sun.

Looking at this film amongst Assayas filmography, it appears to be a very personal film for the director. It’s almost as if he is accounting for his own transition into purely constructive cinema starting with Something in the Air, and fulfilled by Clouds of Sils Maria and Personal Shopper.

Edward Weston: After WWII a purist approach to Photography was advocated by photojournalists and dominated by Edward Weston and Ansel Adams. They preached what Adam’s called “previsualization”: the full realization of the image at the moment of exposure. In their point of view any post tampering with the negative was anathema. Weston’s widely exhibited prints were unmanipulated or “straight” completely free of embellishing handiwork.

He was focused primarily on form rather than the recording of events–an approach more akin to painting rather than documenting. His goal was to reveal the significance of his subject without providing any context or reference of time. He called it revelation of the subject. Inspired by nature his subjects were almost exclusively organic. Nudes, vegetables and rock formations frequent his work and share intertwining visual themes as they are posed, placed or found in stillness.

Blog series I am enjoying

Wait But Why: The Story of Us. This is a trump era inspired thesis on human behavior. And particularly thought provoking is the concept of how the primitive mind, the higher mind and our belief systems intertwine and compete with each-other.

Photography suits the temper of this age – of active bodies and minds. It is a perfect medium for one whose mind is teeming with ideas, imagery, for a prolific worker who would be slowed down by painting or sculpting, for one who sees quickly and acts decisively, accurately. – Edward Weston